I started doing customs because of the pitiful amount of Joe releases in Canada since 2000, which has sadly continued until present (Only New Sculpt Wave 1 has been released here...and a pitiful amount of Wave 5 SpyTroops). Anyways, here are a few of my other custom projects that I've done, some using my custom parts, some not.

Flying Close Air Support for the Night Vipers is the Cobra Nightstorm Gunship, a repainted Locust with custom-made decals. The crew is two Funskool Streethawks. 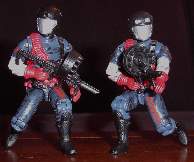 Stemming from my dissatisfaction with the 2000 Rock-Viper I created the Storm-Viper heavy infantry troops, using my black head casting. My Viper Vanguard troops in tactical woodland pattern camouflage.

A Viper in Winter Gear. A super simple custom using a Big Ben body with a lightly painted and scuffed natural casting.

Neo-Vipers in the Cobra hierarchy. Neo-Vipers are - according to their files - Infantry OFFICERS. "Officer" implies a command position. To me that means they are not your standard grunt... As such, my Neos fall into two categories - Infantry Captains and Warrant Officers serving, for example, as aides to or team members under a Neo-Viper Officer. Sometimes they assume a command role of a larger unit and sometimes they are employed as small infiltration teams in harsh environments. Their elite status, to me, implies that they would not be subordinate to other "conventional" Cobras. (I repainted and detailed some v1 Neos. As per the old Cobra nomenclature, the Silver insignia is the Officer and the Red insignia is the Warrant Officer.)